The Warehouse Group Limited (WHS) was established in 1982 by Sir Stephen Tindall, initially selling imported and manufactured clearance lines in Takapuna, Auckland. The Warehouse has subsequently grown to become one of New Zealand's largest general merchandise retailers. The group was listed in November 1994 following a public issue of 23.6 million ordinary shares at $2.50. In 2013, The Warehouse group announced the acquisition of all 92 stores of specialist Consumer Electronics and Home Appliance retailer Noel Leeming Group for $65 million NZD. This was followed by the announcement that WHS has signed an agreement to acquire 51% of the shares of Torpedo7 Limited, a leading New Zealand online retailer operating through the Torpedo7, 1-day and Urban Daddy websites in New Zealand and Australia.

The Warehouse Group reported Group sales for the year were $2,239.5 million, up 29.3% and adjusted net profit after tax increased 13.1% to $73.7 million. Reported net profit after tax was $144.7 million, an increase of 61.1% compared to $89.8 million last year, primarily due to gains on the disposal of property. The Directors declared a final dividend of 5.5 cents per share, representing 89.0% of adjusted earnings.

Over the past 12 months, WHS’s quarterly retail sales showed improving positive growth. The Chairman said in a statement “We believe we will see gradual ongoing improvements in consumer confidence and spending further supporting the recent retail sales growth trend. As our earnings are significantly influenced by Christmas trading performance it is too early to provide specific earnings guidance. The key elements of the Group’s strategic plan should ensure adjusted net profit after tax in FY14 is above that recorded in FY13.”

The Warehouse Group reported underlying net profit after tax, or NPAT, of NZD 73.7 million. However the 13.1% growth is due to the gains from its acquisition. The overall group’s operating margin reduced to 5.0% in 2013 from 5.6% in the previous year. The reduction in margin is attributed to the low margin of Noel Leeming Group (2.8%) and Torpedo7 (2.7%). Sales growth in the next five years is likely to grow due to the acquisition of Noel Leeming and The Group should gain increase in revenue from the online sales as the current trend of online shopping is growing and with some strategic acquisition The Warehouse should be able to use that to its advantage. WHS believes that the online sales will grow 3 times its current level in the next 5 years.

The Group’s dividend policy is to pay a dividend equal to 90% of adjusted net profit. The Board declares two dividends annually in respect of the half year (interim dividend) and full year results (final dividend). All dividends paid were fully imputed. Supplementary dividends of $0.595 million (2012: $0.601 million) were paid. Dividends are expected to increase at a steady pace in the future.

The shares have climbed 29 percent this year. The stock is rated an average 'hold' based on seven analyst recommendations compiled by Reuters, with a median target price of $3.75 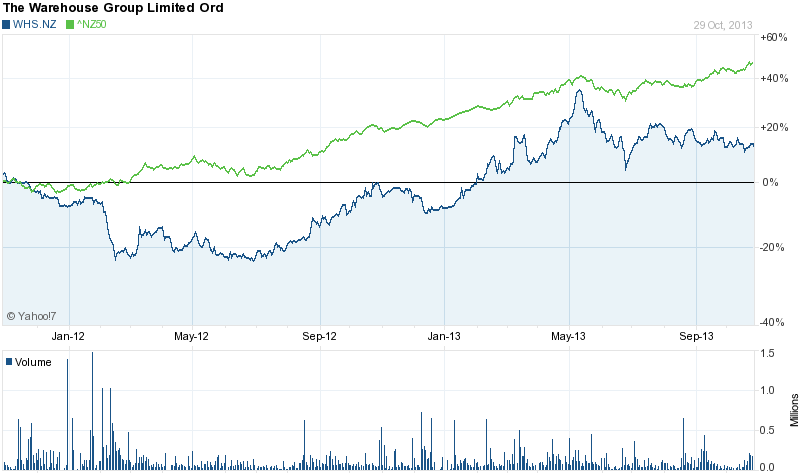