Michael Hill International Limited owns the brand “Michael Hill” and operates a retail jewellery chain of 263 stores in Australia, New Zealand, Canada and the United States as at 31 December 2012.

A unique retail jewellery formula that included dramatically different store designs, a product range devoted exclusively to jewellery and high impact advertising, elevated the Company to national prominence. Michael Hill now has a presence in British Columbia, Alberta, Manitoba, Saskatchewan and Ontario. It employs over 2,200 permanent employees who are involved in retail sales, manufacturing and administration. It has approximately 3,500 shareholders. 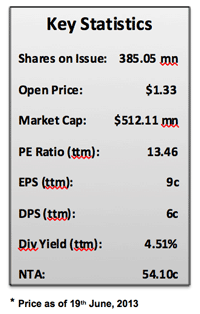 The New Zealand retail segment revenue increased by 3.6% to $63.11million for the six months, with an operating surplus of $12.94million, an increase of 6.2% on the corresponding period last year. Same store sales during the twelve months increased by 3.0% which was 9.2% last year.

The Australian retail segment increased its revenue by 10.6% to AU$162.712m for the six months with an operating surplus of AU$27.986m, compared to AU$24.363m for the previous corresponding period, an increase of 14.9%. Same store sales in local currency increased 3.8% for the six months compared to 1.5% decrease last year. Seven new stores were opened in Australia during the period.

Canadian Retail Operations
Canadian retail segment increased its revenue by 21.5% for the six months to CA$29.463m and there was an operating surplus of CA$1.555m, up 31.7% on CA$1.181m for the previous corresponding period. Same stores sales in local currency increased 3.8% for the six months compared to 5.2% last year. Five new stores were opened during the period.

In New Zealand, the Inland Revenue Department (IRD) has questioned the manner in which the group restructuring transaction was financed. In Australia, the Australian Taxation Office (ATO) has queried the value at which the intellectual property was transferred. In New Zealand, the amount in dispute is $24,636,000, being the tax effect of deductions claimed by the New Zealand Group from the date of the sale through to 30 June 2012. In respect of Australia, the deferred tax asset balance at 31 December 2012 was $41,591,000 as a result of depreciation of components of the intellectual property and a previously announced adjustment in value. Both matters are capable of being resolved by agreement, but if the Group is unable to find common ground with either the IR or ATO then further formal legal processes may be needed to achieve resolution.

Michael Hill future growth depends on gaining success in Canada and the US, which they hope will be as similar as Australasia. Successful branding and cost-cutting measures helps the company’s dominant position in Australasia. Due to its cyclical industry nature, growth-oriented company like Michael Hill may be volatile at times but it should be noticed that the management has shown capability to gain positive earnings even in adverse condition.

The company’s margins for period ending 31st Dec, 2012, were higher across all geographies. New Zealand delivered record margins and growth wise, the Australian division achieved the highest growth in operating earnings. Australia is the firm’s largest market accounting for 73% of operating earnings and has good long term prospects. The management increased the dividends 25% to 2.5 cents per share (cps) signaling their confidence for the firm’s future cash flows.

New Zealand continued to do well under current economic circumstances. Consumer spending has started to pick up in NZ due to a buoyant housing market. On the other hand consumer spending in Australia continues to remain challenging. However, the interest rate cuts instituted in the recent past might revive consumer confidence. Same store sales increased 3% in the first half following the 9.2% growth in the same period last year. Michael Hill managed to attract customers with an improved product offering. Operating margins increased from 20% to 20.5% as a result of higher sales.

In spite of being a profitable business Michael Hill is not adverse to risk. The cyclical nature of the industry may keep future earnings volatile. The company’s raw material costs (gold, silver and diamonds) fluctuate as well. Foreign exchange risk also affects the business and will increase as Michael Hill try to expand stores in Canada and US. Inventory management can be difficult given changeable customer demand, fluctuating global prices for raw materials and foreign exchange movements. Therefore, efficient inventory and cash management remains a critical component in the success of the business during difficult times. Also there are two outstanding issues involving the NZ and Australian tax departments which could potentially dent the firm’s cash flows somewhat in the future. The company is trying to reach an agreement with both the tax departments but if unsuccessful would seek legal recourse to resolve the matter. However there is no certainty that they would win the case in which case it would be liable for taxes in one or both countries.

In conclusion the core business of Michael Hill is strong within Australasia. A strong brand, scale-related efficiencies and vertical integration all combine to give Michael Hill a solid foundation for the future. Michael Hill is a high to medium-risk investment, which would suit a long-term, growth-oriented investor. The share price has increased 32% in the last one year and rated to outperform the market as stated by Reuters.