The Trust listed on the NZX in December 1993, following an issue of 45 million units at $1.03. Proceeds from the public issue were used to acquire the North City Plaza, near Wellington, and subsequent expansion saw a series of acquisitions and developments in the retail, commercial and industrial sectors. 1998 saw commencement of the 38-level Royal SunAlliance Centre in Auckland, through a new listed vehicle Kiwi Development Trust, which became wholly owned in 2001 following a successful share exchange offer for the balance of units on issue. In November 2004 it acquired a 19.9% stake in Capital Properties NZ Ltd at $1.15 per share.  In October 2007 the Trust confirmed it had registered as a Portfolio Investment Entity (PIE).

Kiwi Income Property Trust posted a 7.8 percent drop in annual profit as costs from exiting its management contract with Commonwealth Bank of Australia outweighed valuation gains and insurance payments. Net income fell to $101.3 million in the year ended March 31, from $109.8 million a year earlier although revenue rose 5 percent to $208.7 million.

Kiwi Income paid $74.5 million to exit its management contract with CBA, taking the management inhouse, and plans to put a proposal to investors later this year to move to a company structure which it says will reap savings and greater protections under the Takeovers Code and Companies Act.

In the past year, the trust increased its after-tax distributable income by 25 percent to $76.3 million. Net rental income rose 9.7 percent to $148.7 million as it benefited from new and refurbished properties. The trust paid a final distribution of 3.2 cents per unit, taking the annual payment to 6.4 cents

The value of the trust's property holdings increased by $8.5 million over the past year, taking the total value to $2.13 billion. The value of its interest rate derivatives rose by $29.1 million and it gained $52.9 million from insurance and litigation settlement.

Kiwi Income expects its distribution reserve and the financial benefits from taking its management contract inhouse will enable it to forego 21 months without rent from its building at 56 The Terrace in Wellington from November as the property undergoes a $67 million refurbishment ahead of a new 18-year lease with the Ministry of Social Development. It expects that to increase to about 6.5 cents in the coming year as it benefits from a strengthening economy. 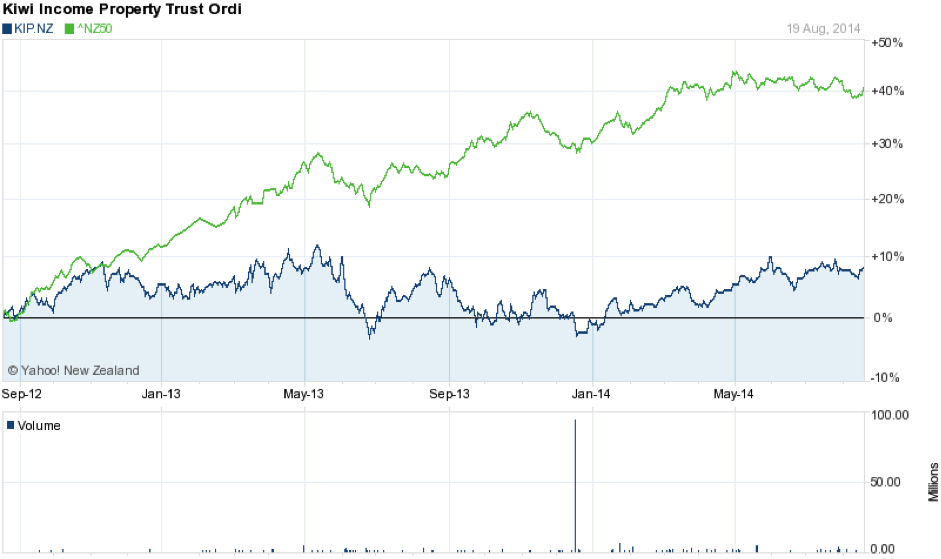