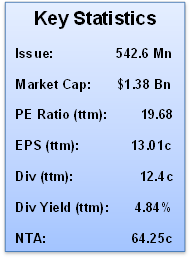 Fisher & Paykel Healthcare [FPH.NZX]: Formerly Fisher & Paykel Industries (F&P), the company arose in its present form from the separation of the major trading businesses of F&P (in Appliances and Healthcare) in November 2001. As a result, the company's securities are listed in NZ and Australia. The healthcare business is a leading designer, manufacturer and marketer of heated humidifiers for use in respiratory care and the treatment of obstructive sleep apnea (OSA). In addition, it offers patient warming and neonatal care products, and infant resuscitators and CPAP systems to improve infant respiratory functions. Its products are sold to hospitals and healthcare facilities in over 90 countries, through an international network of distributors, and sales offices in the USA, UK, France, Germany, Australia and NZ.

FPH announced net profit after tax increased 18% to NZ$33.3 million compared to NZ$28.3 million for the first half 2012.Total operating revenue grew 6% to a record NZ$266.9 million, or 8% growth in constant currency, with good progress in both of their respiratory and acute care (RAC) product group and obstructive sleep apnea (OSA) product group. The directors have approved an interim dividend for the financial year ending 31 March 2013 of 5.4 NZ cents per ordinary share (2012: 5.4 cents), carrying full imputation credit, for New Zealand resident shareholders that equates to a gross dividend of 7.5 cents per ordinary share. The research and development expenditure grew 7% compared with the same period last year to NZ$21.3million, representing 8% of operating revenue.

Despite the continuing strength of the NZ dollar, the company now expects net profit after tax to be approximately NZ$75 million for the financial year ending 31 March 2013, assuming a continuation of current exchange rates. At its previous guidance update in November 2012, the company said it expected full year net profit to be in the range of NZ$69 million to NZ$72 million. The company stated that growth in demand for their products increased during the first half and they expect a further increase for the remainder of the 2013 financial year.

FPH designs, products and systems are well regarded internationally, selling into 120 countries. FPH has previously been known as a growth share but its results in recent years have been hampered by a strong NZD, which has constrained growth. With 51% of its operating revenue in US dollars, FPH suffers when USD sales are translated into NZD due to a weak USD. In the six month ended 30th September, 2012, respiratory and acute care product group (RAC) operating revenue increased by 11% while obstructive sleep apnea (OSA) product group revenue increased by 3% in constant currency terms  which shows that FPH is still growing its sales in the US Market. FPH expects growth in FY13 to come from the roll out of new products and it continues to expect constant currency growth. FY13 operating revenue is expected to be between NZ$540 million to NZ$560 million and FY13 net profit should come in approximately NZ$75 million, while a weaker NZD will see profit come in at the top end of this range. Meanwhile FPH expects to maintain its dividend of 12.4c per share (+ imputation credits) in FY13 which sees the shares offer a reasonable dividend yield. FPH looks like a favorable investment which is backed up by a decent dividend yield, and it offers growth prospects - despite a continuing strong NZ Dollar.